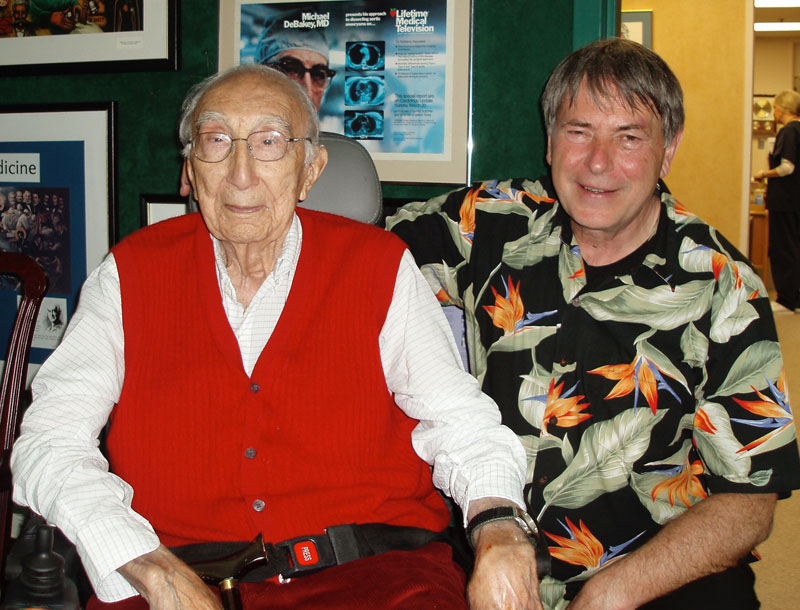 Shortly before Dr. Michael DeBakey’s 100th birthday he wanted to hold a symposium in Houston with his fellow doctors to introduce them to Hildegard medicine. He himself had experienced the healing of a chest wound, which had been infected for almost 2 years with hospital bacteria. By applying a yarrow compress several times a day, as Hildegard describes, and in addition drinking yarrow tea daily the wound finally healed and closed over. Through a spelt diet he was also cured of a life-threatening diarrhea. In addition he had found that galangal made his heart strong. According to Dr. DeBakey 70% of all heart attack patients die in the first few hours after a massive myocardiac infarction. Unfortunately nobody knows that galangal can help immediately and often prevent death.

The abbess Hildegard of Bingen described galangal as a heart medicine, a drug to prevent cardiac attack: „Whoever has pain in the heart area or is suffering weakness due to the heart, should immediately eat enough galangal and he will recover.“

Hildegard (1098 – 1179) combined a spiritual and cosmic understanding of the world with art, music, medicine and religion. Hildegard’s all-inclusive visionary ideas from 800 years ago have given the modern world today many recommendations and descriptions concerning holisitic thinking and living. She was interested in the important questions of mankind, what causes healing and how to maintain health.

The galangal she suggested for the heart is a hot universal spice from the root of a plant related to ginger. It improves the blood supply of the heart and the circulatory system, stimulates digestion, and helps against a lack of appetite and gas. Galangal is a good companion providing relief from heart pain, heart insufficiency and dizziness. Over 20,000 people, who have been helped by Galangal in difficult situations, confirm that galangal is the best remedy to protect from heart attacks, strokes and sudden hearing loss. Galangal should dissolve on the tongue, this is called the "tongue-heart reflex." In this way it prevents a heart pain from developing into a heart attack. Due to its spasmolytic properties it opens clogged coronary arteries, so that pain and life-threatening danger disappear. Other medication is no longer necessary.

The galangal root contains essential oil and resin that cause the hot-bitter taste. Besides oil 6 other sharp ingredients have been isolated and identified. Galangal is also rich in bioflavonoids, which are only found in genuine galangal with its characteristic sharp biting taste.

Official dosage is daily 2 - 5 tablets after meals. The tablets should melt slowly in the mouth, because they are mainly effective over the mucous membranes. Due to its spicy hot taste galangal opens cramped coronary vessels and provides, by virtue of the tongue-heart reflex, more oxygen to the heart and a better circulation of the heart muscle, so that heart pain stops immediately. This opening of the blood vessels causes an immediate sinking of high blood pressure caused by stress.

A friend of mine Dr. Lisa Schaffler is an emergency doctor in Austria who treats patients during their angina pectoris attack only with galangal. She has never lost a patient! No further treatment is necessary in these cases and the pain disappears within minutes.

According to Hildegard of Bingen bloodletting is a universal healing method for the prevention and treatment of all chronic disorders. Every patient is encouraged to have a yearly bloodletting following the precise procedure described by Hildegard.

Unlike a blood donation a Hildegard bloodletting only takes a small amount, approximately one cup (150 – 200ml), of blood during one of the six days starting with the full moon. The patient should not eat and drink at least 4 hours or more before bloodletting.

A big needle 1.5 or 1.8 mm fastened to plastic tubing is used and after checking the blood pressure, one of the veins in the arm is opened: vena cephalica or v. mediana or v. hepatica. The blood that flows out first is very black and full of deposits and flows into a 250 ml. cup. The blood must run out by itself without suction until the black color changes to red at which time it is finished and the blood chemistry tests are done.

Cholesterol, blood pressure and blood viscosity (hematokrit) go down immediately. Liver enzymes, kidney function UA, Urea etc. will improve within 4 weeks. The patient feels at ease and happy. Dizziness and pain disappear. After bloodletting a spelt breakfast is eaten, and a diet with no raw foods, no cheese or meat is kept for 3 days. Sunglasses are important, because the eyes might be sensible to sunlight, TV and computers.

By this simple procedure the sickness-causing substances in the blood (toxins) are removed and the immune system is stimulated. Bloodletting also improves metabolism and stimulates the blood cell and stem cell formation in bone marrow (hematopoiesis and formation of immune cells).

Like in any accident when blood is flowing, endomorphines are released and mood changing hormones are set free to remove any hormone regulation disturbances. Especially in cases of severe chronic illnesses such as arteriosclerosis, cancer, rheumatic arthritis and depression, bloodletting has brought about cures, where modern medicine has had no success.

I have experienced during the last 25 years, that you can change the destiny of each patient with only one needle!

Hildegard’s parsley-honeywine is a delicious and effective remedy and it is easy to make. This ideal combination of heart medicine and heart tonic does relieve pain in the heart, spleen and side.

Boil 8-10 parsley leaves with stems and roots, if possible, in 1 quart of natural red or white wine with 2 tablespoons of wine vinegar for 5 minutes. Add ¾ cup of honey (less for diabetics) and heat up again for 5 minutes. Skim off the foam, strain and re-bottle the wine.

Take 1 to 3 tablespoons daily and all gripping shooting heart pain, caused by weather or excitement, will disappear. Not only light heart pain will disappear, but even severe heart pain caused by chronic rheumatic disease or by heart insufficiency can be healed. Parsley-honeywine is valuable in cases of rehabilitation after heart attacks, too.

The parsley-honeywine is one of the best tonics, well known to Hildegard patients and even to Americans. During my first workshop in Valparaiso, Indiana, at the Art Barn, I was happy to hear of one lady’s experience with the wine during the past 2 years. She had suffered a heart attack and had had continuous heart pain and significant alterations in her electrocardiogram. For two years her heart pain has been gone and her electrocardiogram has returned to a normal pattern.

In her Physica, Hildegard of Bingen describes the healing powers of seven grains, with spelt clearly holding the leading position. Spelt is superior to every other grain! Spelt maintains and preserves good health. Spelt, she writes, is the most valuable grain and contains all the nutritional elements required by humans.

In recent years spelt has been thoroughly researched. Three large scientific symposiums – two at the agricultural University of Hohenheim near Stuttgart, Germany, and one in Potenza in southern Italy – have focused specifically on spelt, and have confirmed many characteristics described by Hildegard. Today, we can scientifically prove, word for word, Hildegard’s statement of 850 years ago: “Spelt produces good blood, improves muscle growth, makes us happy and nourishes optimally....”

Every word that Hildegard says about spelt reflects a pharmacological principle. No other grain offers so many valuable characteristics. Spelt is the best grain and has a warming effect (promoting good circulation). It is high in unsaturated fat, nutritious, milder than all other cereal grains and it promotes muscle development. Spelt makes a good blood profile, improves the temperament, is palatable and versatile and it is easily digested.

Spelt rarely causes the problems associated with our modern wheat grain, which is probably why it’s becoming increasingly available and popular. Today it’s easy to find spelt bread, pasta and noodles, breakfast cereals, crackers, cakes, pastries and pies. The good news is, that spelt is not only higher in nutrients than wheat, but it tastes better too. The products are just as light and easy to cook as those we have become used to. (Woman’s Day, Jan.17, 2005, Sydney)

In terms of its cultivation qualities, spelt differs considerably from wheat with its undemanding nature, robustness, resilience in winter and low susceptibility to disease.

For this reason, an old agricultural textbook states:
“In harsh mountainous locations, in which even the hardy new breeds of wheat cannot thrive, one stays with the tried and trusted spelt, which is sown just like plain wheat as a winter and summer variety. Spelt not only thrives in a harsher climate; it also does not require such deep, loose, and continuously saturated soil. It survives dry spells in shallow mountain soil ....”

Even today spelt is still the best grain. Thanks to its robustness it has strong ecological advantages. Spelt requires neither chemical nitric fertilization nor pesticides or fungicides, so that not only the soil but also the ground water remains undamaged by spelt cultivation. Spelt grain varieties share a tremendous resilience to extreme weather conditions such as heat, cold, drought and floods; they are also undemanding with regard to soil, and it is possible to cultivate them without the use of chemicals.

The grain is enclosed in a husk (spelt), which protects it from acid rain, radioactive fallout and air contamination, as well as ensuring that it contains no insecticides, pesticides or carcinogenic aflatoxins. After the Chernobyl disaster of April 1986, when a permissible pollution level of 600 Bq per kilogram for food items was established, radioactive readings in Constance, Germany, showed that spelt measured between 5 to 7 Becquerel (Bq) per kilogram.

All the wisdom of Hildegard’s teachings on nutrition is hidden in the spelt grain, which is distinctive for its simplicity and versatility. Spelt contains all the basic ingredients for living which the human body requires for good health: biologically highly valuable proteins, complex carbohydrates, essential minerals, protective health-sustaining vitamins and trace elements. In addition, spelt also contains vital components for stimulating the immune system and protecting against illness.

Through overeating or from a diet saturated with fat or raw foods, the heart muscle can be damaged. The simple change to a spelt diet alone can therefore help every patient.

Hildegard of Bingen laid the foundation for the science of holistic healing with her medical book describing the „Causes and Treatment (Cures) of Sicknesses“ which was entitled originally in Latin „Causae et curae“ and is not only valid for curing sicknesses but is also important for healing the whole individual.
Hildegard’s healing art is actually preventative medicine. It is a fact, that health depends to a large part on life style and nutrition, which is accepted today by the scientific community worldwide. Nevertheless this knowledge is not being taught nor is it being practiced to any great extent. Intensive scientific studies on all the continents prove, that with good nutrition and a healthy life style, mankind can reduce cancer and many other diseases by 80%.
Hildegard of Bingen successfully connected man and world, creation and that which has been created to a universal unity. These valuable visionary thoughts belong without a doubt to our world’s cultural heritage.