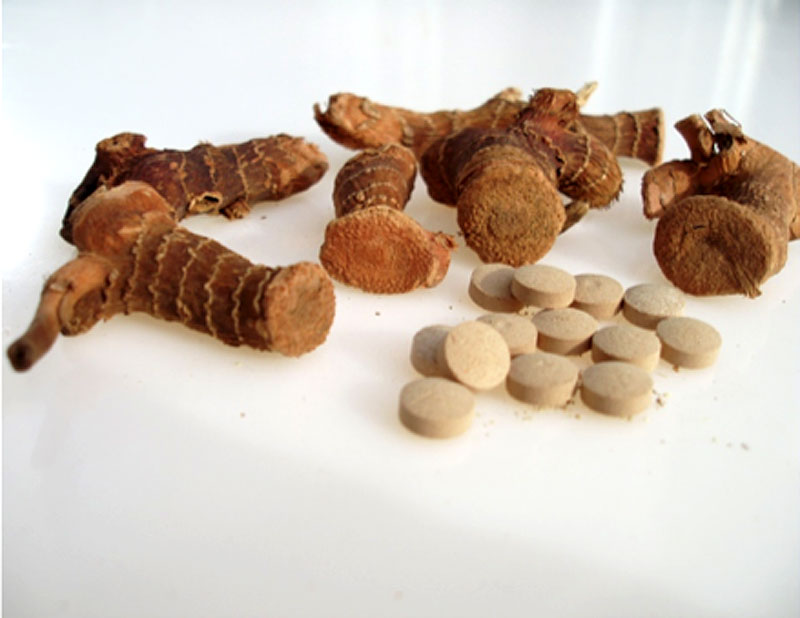 There are numerous plants belonging to the same botanical family that have been called lesser galangal. It is easy to be misled because common names are practically interchangeable. No great harm will be done by using one rhizome instead of the other since none of them are noxious. However, the flavour will be different. Among the plants that are sometimes mistaken for lesser galangal are Kaempferia galanga (see GINGER, AROMATIC) and Boesenbergia pandurata (see KRACHAI).

Lesser galangal was used in Europe in mediaeval times, and mentioned in the writings of Arabic physicians Rhazes and Avicenna. It was first recorded by Ibn Khurdadbah in 869, who listed it as an article of trade from the Far East. It was commonly used as a culinary spice together with cloves, nutmeg and ginger, but the plant itself was not described until 1870, when it was named for Prosper Alpinus.

True lesser galangal is native to the island of Hainan, and the south-eastern coast of China. It is not a culinary spice, but used in Chinese medicine.
Purchasing and storing: The Chinese name for lesser galangal is san bai. It is sold at Chinese herbal shops, mainly in the form of small round slices of the dried rhizome. It will last almost indefinitely kept airtight.
Preparation: Simmered in the cleansing, toning and healing soups which are part of the traditional Chinese kitchen, a soup to serve 4-6 people could include 1 tablespoon of dried lesser galangal slices.
Medicinal uses: The classic Potter's New Cyclopaedia of Botanical Drugs and Preparations by R. C. Wren and R. W. Wren, yielded useful information: 'Carminative, stimulant is specially useful in dyspepsia, preventing fermentation and removing flatulence. The decoction of 1 oz in 1 pint of boiling water may be taken in tablespoonful to wineglassful doses.'

Galangal is a hot universal spice from the root of a plant related to
ginger. It improves the blood supply of the heart and the circulatory
system, stimulates digestion, and helps against a lack of appetite and
gas. Galangal should be your constant companion for reliable
protection from heart pain, heart insufficiency and dizziness. Over
20,000 people, who have been helped by Galangal in difficult
situations, confirm that Galangal is the best remedy to protect them from heart attacks, strokes and sudden hearing loss.
Galangal, the unleashed elemental force from Asia, also protects
effectively against circulatory collapse, travel sickness and extreme
fatigue. Galangal should dissolve on the tongue, this is called the
"tongue-heart reflex." In this way it prevents a heart pain from
developing into a heart attack. Galangal is also an excellent
treatment for strokes, gastrointestinal cramps (Roehmheld-syndrome), bad circulation, exhaustion, lack of appetite, bad digestion and for "manager syndrome."

Hildegard writes:
"Whoever is suffering from heart pain or is threatened by a
cardiovascular weakness (fainting) should immediately eat a sufficient amount of Galangal and he will feel better."

Galangal is much spicier than paprika or cayenne pepper. Let it dissolve slowly in your mouth. Do not swallow the pills without dissolving or chewing them, for sensitive stomachs may react with a feeling of pressure or a pain. Undesired side effects are unknown. The dependable heart effectiveness of Galangal ranks among the most sensational discoveries of Hildegard medicine. Due to its spicy hot taste Galangal opens cramped coronary vessels and provides, by virtue of the tongue-heart reflex, more oxygen to the heart and a better circulation of the heart muscle, so that heart pain stops immediately. This opening of the blood vessels causes an immediate sinking of high blood pressure caused by stress. Galangal's anti-inflammatory properties also eliminate rheumatic and sciatic pains. Inside the intestine the essential oils prevent the growth of disease-causing pathogenic bacteria, candida and viruses.

Use:
Put 1/4 to 1/2 tsp. of galangal root powder on the tongue, 5 minutes later drink a shot glass of parsley wine, if necessary repeat again 5 minutes later.
Use galangal honey on bread or in spelt cereal. Especially tasty and effective is a mixture of galangal and (flower blossom) honey. Prepare by mixing 1 Tbsp. of galangal with 1/2 cup of honey. More spicy and even more effective is 2-3 Tbsp. galangal in 1/2 cup of honey. Careful, the dust may cause sneezing. Children should use
the weaker and adults the stronger galangal honey.
Galangal wine: Boil 1 Tbsp. chopped galangal root in 1 cup of organic wine for 3 minutes, strain and drink in sips while warm. This alleviates rheumatic and sciatic pains.
Galanga – a drug to prevent cardiac attack

Galangal, Alpina officinarum, is botanically closely related to ginger. On his trips Marco Polo described plantations of galangal in the province Kachanfu and by Tonkin.

Originally galangal grew in Thailand and Southern China. But today it is found in all of Indonesia, Australia, Japan, East India and even in Central America on the Antilles Islands.

The branching roots are robust and spread in all directions creating many stems. The stems with their white fragrant blossoms grow 60 to 150 cm. high.

In the 16th century Dr. Mattioli wrote: „Galangal freshens the breath, supports digestion and rids the body of unpleasant gas." This indication has been reinforced by modern science and led to its acceptance and official approval as a medicine. Similar results were discovered by Paracelsus.

The abbess Hildegard of Bingen described galangal as a heart medicine: „Whoever has pain in the heart area or is suffering weakness due to the heart, should immediately eat enough galangal and he will recover." As in other cases Hildegard's indication is completely different from the medical knowledge of her time, which proves that she did not compile the medical knowledge in the cloisters of her era into her own works.

The galangal root contains essential oil and resin that cause the hot-bitter taste. Galangal is also rich in bioflavonoids, which are only found in genuine galangal with its charateristic sharp biting taste. Galangal oil (Oleum Galangae) is distilled from the dry powdered root.It is a yellow liquid with a eucalyptus-cardamon-ginger smell. The dried root contains .5-1.5% essential oil which has 81 various constituents all of which have been identified by gas chromatograph techniques.

Besides oil 6 other sharp ingredients have been isolated and identified.

In modern scientific literature 2 important principles of galangal have been described: its antiphlogistish (anti-inflamatory) characteristics as well as its carminative and spasmolytish activity. The first principle has been examined thoroughly by a Japanese team.

The essential oil in galangal prevents meteorism and intestinal spasms. The oil also inhibits the growth of bacteria and fungus infections.
improves the blood supply of the heart and the circulatory
system, stimulates digestion, and helps against a lack of appetite and gas.

20,000 people, who have been helped by Galangal in difficult
situations, confirm that Galangal is the best remedy to protect them from
heart attacks,
strokes and
sudden hearing loss.
Galangal protects effectively against
circulatory collapse, travel sickness and extreme fatigue.

Hildegard writes:
"Whoever is suffering from heart pain or is threatened by a cardiovascular weakness (fainting) should immediately eat a sufficient amount of Galangal and he will feel better."